Author F.T. McKinstry has been kind enough to write a guest blog post for Mighty Thor JRS today. I am very excited and I would like to thank Faith for the opportunity to host this Guest Blog.

Would you like to be a part of my author guest blog series? Please contact me! mightythorjrs@gmail.com

And don’t forget to check out her latest book:

So go get your copy!

Wolves, Ravens, and the Hooded One
By F.T. McKinstry 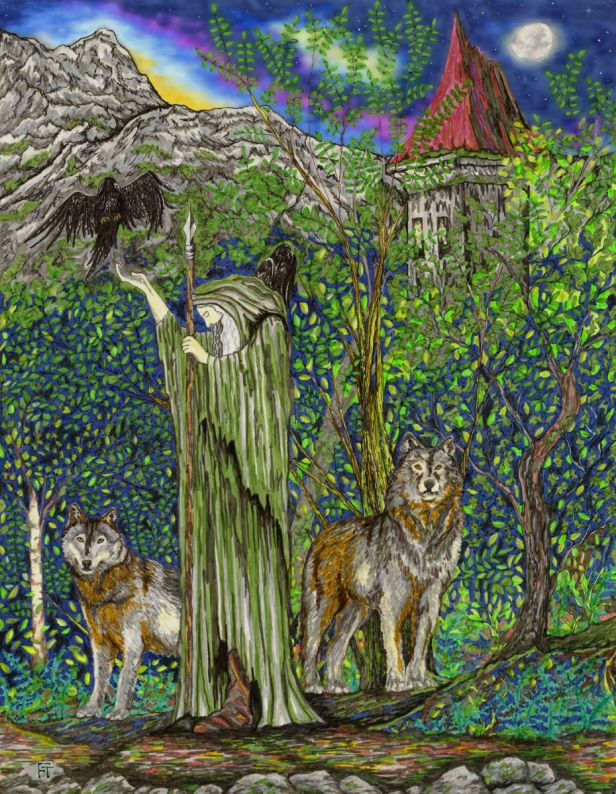 Wolves and ravens. Romanticized, vilified and deified, these intriguing creatures reflect our dreams and shadows like few others. One source of their fame in popular imagination began in ancient Scandinavia, where reverence for wolves and ravens was not only pragmatic, such as the symbiotic relationship in which the animals led hunters to prey and shared in the spoils; but also pantheistic, by connecting to and identifying with the animals as helpers, shamanic totems, and messengers of the gods.

Enter Odin, the Allfather in the Norse pantheon. A deity par excellence, Odin is the one-eyed, all-seeing god of war, magic and wisdom. He is a complex and enigmatic figure, associated with poetry and inspiration, madness and battle fury. He hungers for knowledge. A notorious shapeshifter, he is known as a trickster who might grant favor to a devoted follower only to vanish when most needed. Odin is a patron of shamans, poets and magicians who, in their search for truth and pattern, endure grueling trials of hardship and isolation.

Wolves and ravens are Odin’s familiars, of a sort. 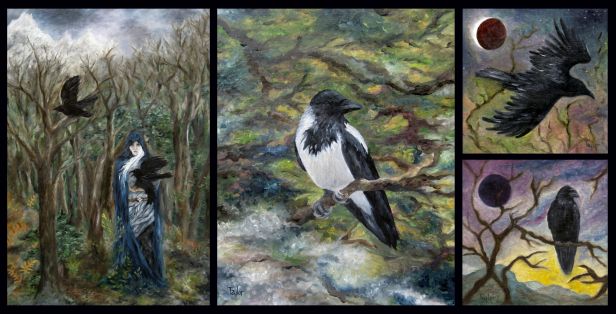 Among the many names attributed to Odin is Raven God. The connection between Odin and ravens is deep and ancient, existing before the Viking Age. A god of death and war, Odin was naturally associated with these carrion birds, the beneficiaries of sacrifices and battlefields, and harbingers of the god’s favor. In keeping with Odin’s intellectual nature, ravens are also extremely intelligent. Two of these birds, Hugin (thought) and Munin (desire), fly over the land and tell him of all they see and hear.

In traditional animal lore, crows and ravens are given the honor of belonging to both the seen and unseen realms. They are creatures of the hinterlands, mysterious, powerful and devious. That these birds tend to accompany death also makes them ominous, both feared and revered by their presence on the carcasses of animals, the condemned, or fallen warriors. They are omens, symbols of the implacability of death, and bringers of information from the other side.

Odin is also accompanied by two wolves, Geri and Freki (both meaning “ravenous” or “greedy one”). He gives his wolves all of his food, and drinks only wine. The wolves are said to roam over battlefields, devouring carnage. As the ruler and bestower of battle madness, Odin is the patron god of berserkers and warrior shamans called úlfheðnar (wolf-hides), who underwent powerful initiations in the wilds, living like wolves, to reach a state of possession and thereby acquire the beasts’ strength, fearlessness, and fury—much to the terror and dismay of their enemies.

On the flip side, Odin is the enemy of Fenrir, a monstrous wolf sired by Loki, the wily and ambivalent trickster. When Fenrir grows out of control, the gods are compelled to chain the wolf using deception, a stunt that comes with a great sacrifice. Fenrir will break free at Ragnarok, the fall of the cosmos, and devour everything in his path, including Odin. Another tale is that of Fenrir’s sons Skoll (One Who Mocks) and Hati (One Who Hates), wargs that chase the sun and moon through the sky in hopes of devouring them. At Ragnarok, they will catch their prey, and the sky and earth will darken and collapse.

The wolf, with its ferocious and apocalyptic reputation in Norse mythology, its prowess and grace in nature, and a distinctive howl that puts a primordial chill on the flesh, is an exemplary metaphor, an antagonist in many a dark tale, and a patron of warriors.

Given the frequent appearance of wolves and ravens in mythology, legends, folk and fairy tales throughout the ages, and their remarkable natural traits, it’s easy to see why they are so common in works of fantasy. Battle prowess, cunning, guile, mystery, trickery and darkness—imagery and metaphors abound. My own work is no exception; a love of Northern European mythology and the grim and sublime traits of wolves and ravens inspire me to no end. 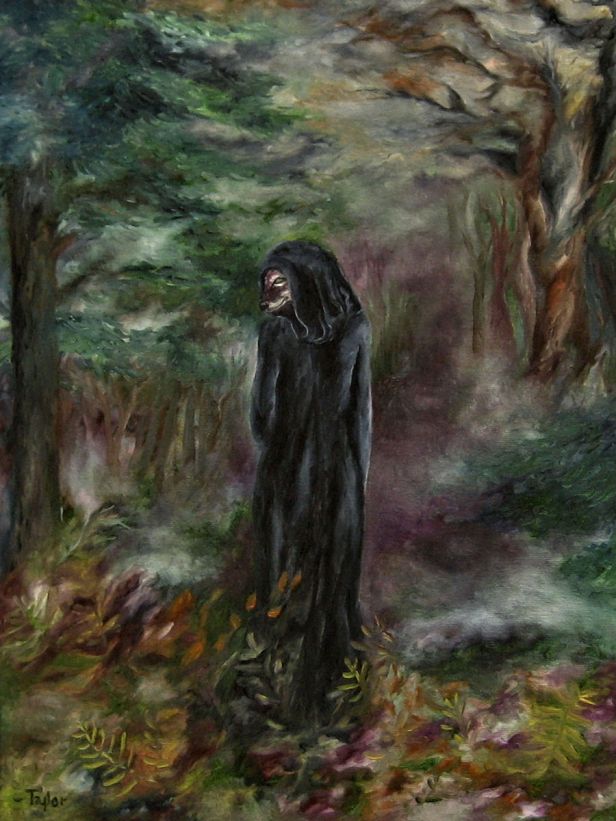 an ancient hierarchy of wizards holds the raven as the highest level of attainment in the magical arts. The wolf takes on its spookier characteristics in the lore of the Old One, a goddess of life, death, and transformation. In her darkest aspect, the Destroyer, she appears in the shape of a wolf. Water Dark, a novella that takes place in the world of Ealiron, delves deeply into the shadowy, fickle nature of this being, who commands a high price for being summoned, good or ill.

Lorth of Ostarin, the driving force in the Chronicles of Ealiron, is an assassin raised by a wizard. He has the eyes of a wolf and an affinity for ravens, which, being the opportunistic creatures they are, tend to follow him around in much the same way they follow wolves, and for the same reason: to clean up the mess. Lorth and his grim companions also appear in “The Om Tree,” a short story told by an ancient tree that gets its best gossip from—you guessed it—ravens. 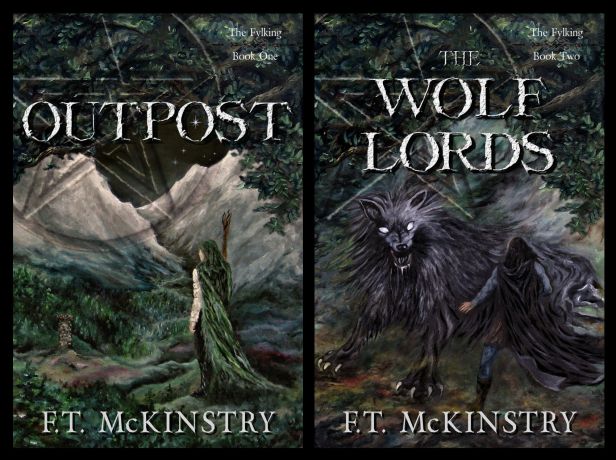 The Norse gods haunt many worlds, not just Earth. In Outpost, Book One in The Fylking, Odin, in keeping with his nature, appears at strange times and in strange ways, leaving our protagonists to wonder what he is and whose side he’s on. He goes by many names: Hooded One, Wanderer, Magician. He is served by the Fylking, immortal, Viking-like warriors who take the shapes of wolves and ravens, among other things, though even they can’t guess his agenda. The Wolf Lords, Book Two, delves into the Fenrir Brotherhood, an ancient order of sorcerers who serve the Wolf Gods of the North, including, it is said, Loki himself. Fenrir is their patron, a force used in a variety of nasty ways that don’t always serve the ones who summon him.

Odin, of course, lurks in the shadows, watching and waiting.

If you’d like to see something beautiful about the value of wolves in nature, watch this: <a href=“https://youtu.be/ysa5OBhXz-Q”>How Wolves Change Rivers</a>

And if ravens fascinate you, do check out the work of Bernd Heinrich, a naturalist who has done fantastic research on ravens in the wild:
<a href=“https://www.goodreads.com/book/show/122665.Ravens_in_Winter”>Ravens in Winter</a>
<a href=“https://www.goodreads.com/book/show/254704.Mind_of_the_Raven”>Mind of the Raven: Investigations and Adventures with Wolf-Birds</a>

Norse mythology? Here’s a good website, and it includes some excellent reading lists: <a href=“http://norse-mythology.org/”>Norse Mythology for Smart People</a> F.T. McKinstry grew up studying music and reading books. An old-school fantasy geek, she acquired a deep love for fantasy, science fiction and the esoteric, of which she was an avid reader. With a background in computer electronics and software development, she wrote and illustrated technical documentation for many years, during which time she created fantasy worlds. She is inspired by plant and animal lore, Northern European legend and mythology, fairy tales, mythical creatures, music, medieval warfare and shamanism.

F.T. McKinstry is the author of the fantasy series The Fylking and The Chronicles of Ealiron. Her short stories appear in Wizards, Woods and Gods and various fantasy/scifi magazines. Aside from books, she enjoys oil painting, gardening, yoga, hanging out with her cats and fishes, and being in the woods. Nine thousand suns ago, a race of immortal warriors came from the stars through a rare alignment and stepped onto the world of Math, a world much like their own, a perfect place for a backwater outpost from which to fight their ancient war. The realm they claimed came to be known as Dyrregin, Gateway of the Gods.

They call themselves the Fylking. Unseen by all save those sensitive to the Otherworld, the Fylking taught seers to build and ward over the Gate, an interdimensional portal spanning the realm like a sigil shining on the surface of the world. The Fylking’s enemies, pitiless beings who think nothing of annihilating a world to gain even a small advantage, are bent on destroying it. They succeeded once, leaving Dyrregin in abandoned desolation for a thousand suns.

Twelve centuries have passed since the Fylking returned. Dyrregin is at war. Seers are disappearing and their immortal guardians are blind, deceived by their own kind. A Gate warden with a tormented past discovers a warlock using Fylking magic to gather an army of warriors that cannot die. A King’s ranger who defends the wilds of the realm is snared in a political trap that forces him to choose between love and honor. And a knitter touched by the gods catches the eye of a dark immortal with no name and the power to summon storms.

Forced to find allies in unlikely places, these three mortals are drawn into a maelstrom of murder, treachery, sorcery and war, fertile ground for both their personal demons and those of their immortal masters, who cast long shadows indeed. When they uncover the source of the rising darkness, they must rally to protect the Gate against a plot that will violate the balance of cosmos, destroy the Fylking and leave the world of Math in ruins.

The god they serve is as fickle as a crow.

Finalist in the 2016 Self-Published Fantasy Blog-Off.

“The tone is excellent, reminiscent of some of the earliest examples of grim Norse fantasy.” – G.W. Matthews, Fantasy Faction

“McKinstry’s excellent description is both fluid and elegantly simple, and it paints an effective picture of settings, events, and characters. All in all, McKinstry’s book proves to be one of the best independently published fantasy novels of the past year. Tense, gritty, exciting, and romantic, Outpost is a tale avid fantasy readers won’t want to miss.” – Self-Publishing Review

“Rich in detail and beautifully written, the book features incredible world-building, taking place in a fantasy setting that breaks the bounds of expectations. The cultures and concepts and creatures portrayed in this novel are also brought to life so vividly that they practically leap off the pages.” – Mogsy, Bibliosanctum

“This is a novel that will get your heart racing and make you bite your nails. The tension was palpable, the dialogues were crisp and the characters were real, despite having powers. They had human flaws that made them approachable and understanding.” – Rabia Tanveer, Readers’ Favorite

“Outpost is a richly described fantasy world that I could immediately envision. McKinstry does an excellent job of describing the characters and the landscape with such detail that I felt as if I was immersed in the world. I was amazed at the skill needed to keep the characters’ stories separate and unique. I enjoyed this story thoroughly.” – Anna Smith, Readers’ Favorite

“Outpost (The Fylking Book 1) by F.T. McKinstry is an entertaining epic fantasy novel with a unique and distinctly new world sure to entertain anyone who is a fan of the genre. Great story, I really enjoyed it! I’m looking forward to reading more books in this series.” – Ryan Jordan, Readers’ Favorite

The Eye of Odin

4 thoughts on “Guest Blog: Wolves, Ravens, and the Hooded One By F.T. McKinstry”

Follow mightythorjrs – The Black Blog of Nameless Cults on WordPress.com
Join 2,061 other subscribers

Follow mightythorjrs – The Black Blog of Nameless Cults on WordPress.com
Join 2,061 other subscribers