In my hopes of getting every awesome Sword and Sorcery enthusiast/expert I can to come on my blog and share some of their vast knowledge, I was able to convince today’s guest to write a guest blog post for my S&S series.

Fletcher Vredenburgh  has been kind enough to write a guest blog post for Mighty Thor JRS today. I am very excited and I would like to thank Fletcher for the opportunity to host this Guest Blog.

And make sure you check out his articles on these great sites:

It’s been over seven years since I started blogging about swords & sorcery at my site, now called STUFF I LIKE, but originally called SWORDS & SORCERY: A BLOG. Looking back at some of the earliest posts on my blog, I realize that my reasons for doing this have not changed. I stated early on that one of the reasons I read S&S is because it gets “the adrenaline pumping.” I’m glad to write that that still holds true. But why? I’ve got two reasons. Let me give you the literary one first.

Since Robert E. Howard turned historical romances of the sort written by Harold Lamb and Talbot Mundy into supernatural adventures, S&S has been a prime source of modern campfire tales. These aren’t epics like The Illiad or the Mahabharata, filled with armies and divine hosts and concerning terrible world-changing events. They are the tales of individual heroes like Beowulf and Cú Chulainn. It’s one thing to get swept up in sagas, but it’s another to hear the story of a lone character, drawing mostly on his own abilities, facing off against the world–or at least the demons and wizards that haunt it.

Without getting too metaphysical, I believe I’m drawn to S&S because I’m a modern man living in the ultra-modern West and I need to get out from under its demands every now and then. Homo sapiens lived under harsh, primitive conditions for ten times longer than under civilized ones. We came of age in a demon-haunted, shadowy world, where every thing that happened was a portent and every misstep could lead to death.

Now, that wasn’t a good thing. I like my civilized world, and I find people who rhapsodize about noble savagery and the value of barbarism over modernity misguided at best. Nonetheless, a part of that primitive, desperate human still exists in the core of my being. We know there are no ghosts drifting just beyond the glow of the campfire, but a well-told tale can still send shivers down our spines. We, at least in our buried Cro-Magnon brains, thrill every time Conan or Kane overcomes some foe in desperate combat, or outwits another sorcerer. I can savor the creepiness of Nifft the Lean’s escape from Hell or Kane’s from the clutches of his vampire lover instead of quaking with fear like our ancestors might have.

[This] may sound grandiloquent for something so humble as swords & sorcery, but it’s not. We live in a time stripped of myths of heroes like Heracles and Beowulf, but still they call to some deep part of us, stirring our blood with tales of derring-do, clashing steel, the leathery sound of dragons’ wings, and the sulfurous scent of devils. S&S writers are some of our contemporary myth-makers, drawing on their own invention as much as on the great body of human myths legends.

As swords & sorcery readers we want to be thrilled and chilled. Oh, there’s room for humor–black or otherwise–meaning there’s room for Cugel the Clever. What we mostly want, though, are the thrills and chills. Which leads me straight to my second reason for loving S&S.

Since I’ve made myself a niche writing about swords & sorcery, it’s been valuable to understand the literary and psychological and cultural reasons I like it. I’ve been reading S&S for forty years and I keep coming back. If I get pleasure out of something, it’s good to fathom why, which in turn helps me sift the good from the bad. When I review a book I should be able to dig into it and figure out where it comes from, what makes it work, and why anyone else might like it. But, none of this is what makes me buy or read S&S in the first place. I buy it because it’s cool.

I can’t find it anymore, but I read about a roundtable discussion of Lovecraft at a convention years ago in the UK. Karl Edward Wagner got up and gave the sort of deeply thought, thorough, and well-articulated explanation of why he he liked HPL’s stories as much as he did.

When the moderator asked the same question of another artist (whose name escapes me), he pulled himself up from a drunken slump in his chair and blurted out a much more succinct answer than KEW had:

Wagner and others were reportedly annoyed, but man, oh man, that’s spot on for why I like a swords & sorcery. The literary explanations are good and all, but I didn’t pick up Robert E. Howard because of some deep-seated need for modern myths and legends. I did it because of this cover:

Literally, that cover. Conan killing Picts and monsters; that’s the thing I want in a S&S yarn.

These other covers sealed the deal. Who wouldn’t want to know what stories lay behind these images?

On the other hand, even though I had a little enthusiasm for this collection when it was announced, seeing the cover killed it:

It looks like a fantasy romance cover at best. It definitely does not say SWORDS & SORCERY!!! like these covers do: 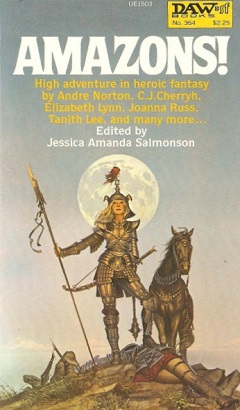 Of course, the insides need to live up to those covers, otherwise it’s no better than buying a poster. There are a lot of Lin Carter books that definitely get oversold by their covers.

I was lucky, I guess. The first S&S book I can specifically remember reading was Conan the Warrior. It won’t save your life or anything, but if your introduction to the genre includes “Red Nails” and “Beyond the Black River,” I think you’ll be hooked.

The first starts with a dinosaur battle and ends with a battle against malign sorcerers in ancient lost city inhabited by the vile remnants of the people who captured and sacked it.

The second is my favorite Conan story. Even after reading the whole series, it remains my favorite. Some folks don’t like that Conan’s not really the lead character, but it is so great. Howard gives us his Cimmerian hero from the world’s perspective and it’s gripping. I was going to quote from the story, but I don’t want to deprive anyone who hasn’t read it yet the frisson of their first encounter. Suffice it to say, Conan is like an apex predator moving through the Pictish hordes; a lion on the hunt among a pack wolves. It’s an epic of life on the bloody frontier between civilization and savagery. When Conan makes his first appearance, he’s described moving with “the dangerous ease of a panther,” and that’s a splendid description of the movement of the story itself.

Over the past six years, between my blog in its various configurations and at Black Gate (thank you, John!), I’ve reviewed dozens of books and hundreds of stories. Some of been astounding works, deserving of a place on every fan’s shelf, alongside their Howard and Leiber. Jumping to mind are the Griots anthologies from Milton Davis, James Enge’s and Howard Andrew Jones’ series, and, most recently, Scott Oden’s A Gathering of Ravens. If you aren’t reading Heroic Fantasy Quarterly and you call yourself a S&S fan, you should be ashamed. Adrian Simmons and company publish some of THE best heroic fantasy around, each and every quarter.

Fletcher A. Vredenburgh (archaeo-bibliophile) is a lifelong Staten Islander with way too many books and poor editing skills. He’s been reading swords & sorcery since he found his father’s copies of Karl Edward Wagner’s Death Angel’s Shadow and Robert E. Howard’s Conan the Warrior. He writes a column for Black Gate most Tuesday mornings and posts at his own site, Stuff I Like, when the muse hits him.

18 thoughts on “Guest Blog: Why Swords & Sorcery? By Fletcher Vredenburgh”